“Let me tell you quite a story about our trip to Nowogrodziec last Saturday.

As I wrote you in my e-mail of December 18, we were invited to the tournament at the new sports hall in Nowogrodziec. As they confirmed that invitation on Thursday, I had only Friday to arrange everything. Frankly speaking, it was so late that I was ready to give it up. Besides, I had no sponsorship, but I thought we shouldn’t miss such an opportunity.
And I was right: everything was perfect! The brand new sports hall in Nowogrodziec was just great, same as the organisation and all the facilities there. The participating youth teams came from 1st, 2nd and 3-rd league clubs from the whole south-west Poland (including the one from Lubin – Champion of Poland last year!) We were the only one not-regular club team. There was also a youth team from Czech Republic (FC Jablonec, 1st league) but their team was 2-3 years younger so they had no chance (even we won them). Certainly, we did not have much chances with other regular clubs but our kids played the best they could and even if we lost 1:3, like it was the last match against a Soccer School Team from Jelenia Gora, I considered it a success rather than defeat.

The tournament was visited by the local TV. They had a short talk with the organizers and then them two recommend two coaches for the interview. I was really astonished because they asked me (why me?) and the coach of the guest Czech team to the interwiev (later on I found out the organizers recommended me for the interview as the manager of “a very special team”. I had to respond questions like who we are, what (and where!) is Grabiszyce, when we started our activity and, first of all, how can it happen that a team from such a petty location like Grabiszyce can participate such a tournament. As you can guess, most of the interview was my telling about PPL, specially in the sports context. And so I told to the camera about our the last two years PPL activities; trainings, friendly youth and veteran matches, our participation to the Regio Haarlem Cup, Ceramika Cup, etc. All these and many more supported by PPL! I guess it was impressive enough because during the interwiev they made sure about the colours of our shirts and filmed much of our last match (including the moment our goalkeeper defended a penalty kick!). I also had a talk with the Czech coach, he congratulated us on our winning them, but to my surprise, he also invited our team to the youth tournament in Jablonec during the winter holiday (at the beginning of February). Everything to the camera! Can you imagine? Well, in this situation the only thing I could do was to accept the invitation with sincere thanks. You can imagine how the kids got excited (well, me too).

Today I have already received an e-mail from him, but also telephone calls from Nowogrodziec, Boleslawiec and Jelenia Gora. You know, the television, even local TV is still a powerful medium. People call inviting us to matches, congratulate me on the activity and on such a partner like PPL. I feel some of them are a bit jealous and/or astonished: “Grabiszyce …where is that on earth?”. The first call was from Luban – also with the invitation to the tournament at the very end of January.

That’s the story. A few days ago I was worrying that we have nothing to do in winter and early spring as I’m not even sure about the trainings at the gym hall in Lesna. Now I am worrying how we can make use of at least some of the invitations. I did not really expect such a situation. One thing I am sure: that will not be possible without your support. 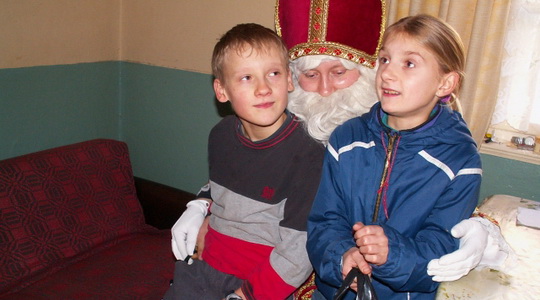